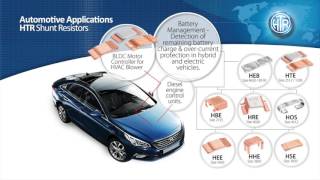 Resistors are one of the commonly found passive components in an electrical circuit, together with presence of capacitors and inductors. They are primarily used to create and maintain a safe current within the circuitry itself. IBS Electronics has been the leading distributor of resistive products for high current, high voltage, and high energy applications for over 30 years.

Resistors are elements of electrical circuits that resist and reduce the flow of current through the electrical circuit. They can also be used to provide specific voltages to active components. Resistors are available with fixed or variable resistance values. Fixed resistors are ones in which resistance never changes. Variable resistors, sometimes called potentiometers, allow resistance to be adjusted. Resistor values are measured in Ohms and a resistor's composition and construction determines the amount of resistance offered. Typically resistors are constructed of metal or carbon and are available in a variety of mounting styles, but through hole and surface mount are the most common.

The size of SMD resistors is indicated by a numerical code, such as 0603. This code contains the width and height of the package. So in the example of 0603 Imperial code, this indicates a length of 0.060 and a width of 0.030.