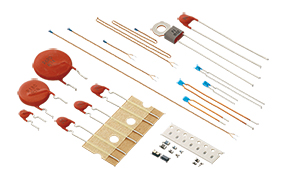 A thermistor is an element with an electrical resistance that changes in response to temperature. This name is derived from the more descriptive term "thermally sensitive resistor," the original name for these devices. Thermistors were first discovered by Michael Faraday in 1833. They're now widely used in a variety of electronic applications, most often as temperature sensors. Additional uses of thermistors include current limiters, current protectors and heating elements.

NTC Thermistors - These are generally used for temperature measurement as their RT (Resistance - Temperature) characteristic is well defined and can be readily programmed. NTCs are highly stable, low-cost and very accurate hence they are used in a large number of temperature sensors found in the home appliance, automotive and office automation markets.
Some larger NTC disc thermistors are used for current inrush limiting as they offer a neat and cost-effective solution to surge currents arising from switching on certain electronic and electrical products, e.g. S.M.P.S.s (Switch Mode Power Supplies), LED driver circuits or halogen lamps.

PTC Thermistors - These are generally used as solid-state fuses or thermal switches because near their transition point (curie point), the resistance increases rapidly by several orders of magnitude over a small change in temperature. This allows them to be easily incorporated into electronic circuitry and in the case of motor protection thermistors, allows several to be used in series to protect each phase of a 3-phase motor.